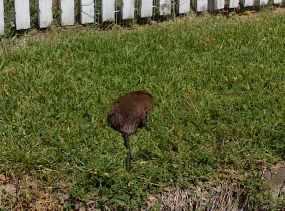 On the way home for lunch yesterday Mike spotted something odd in a yard while we were stopped at a stop sign. It appeared to be a muskrat. After I got back to work I looked them up and apparently they are creatures of the night and like to be around water. Well this one was eating on the side of the road at noon sitting next to a storm drain. I think it there was something wrong with it.

*Side Note: As you may or may not know, I am a huge music person(I almost always have it playing if I am alone and or while I am cooking, cleaning and just plain living). Since I have been here I feel as if  I haven’t found any really good music that I just want to play over and over again(thats the tell-tell sign that I think a song is awesome). The last song that I obsessed over like that was If I Die Young by The Band Perry. You can ask Mike about the amount of times he had to hear that song haha. However a few weeks ago I finally opened my ears to Adele’s Rolling In The Deep and I’m obsessed. Idk why I didn’t like this song earlier as I love Adele and have her debut album(which is phenomenal). So I highly recommend this one! Rolling In the Deep- Adele