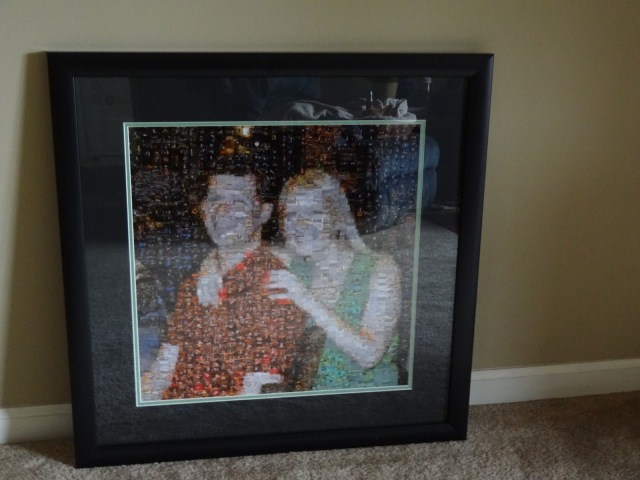 Please bear with me…this is a wordy story! But I am so happy to share it 🙂

Mike totally caught me off guard with the proposal. Props to him for completely flooring me.  I will say that I was just shy of obnoxious asking him when he was going to propose and not one week before the day he did he told me that it would be a while as he had just started his job one month ago. Little did I know he had been planning this for a while and had already had the ring for a couple of weeks!!

On that Friday I was exhausted from work and called him and asked if we could just eat something quick at home so I wouldn’t have to cook and he said of course. After dinner he asked if I wanted to go to Local Culture(my biggest weakness) for frozen yogurt. I checked the website and they had my favorite flavor which we never catch so he said “you want to go now?” and I said yes thinking that we needed to make sure we got there before the students would eat all my precious cookies & creme!! I thought the yogurt was the highlight of my day but as we stood up to leave Mike asked if we could ride through campus as he never gets to go through there anymore since he works somewhere else. I thought nothing of this either as it was frequent that we would ride around town just for fun. He said he wanted to go out to South Farm and see if the observatory was open because he heard that it was supposed to be opening soon. Now there wasn’t a star in the sky that we could see so that should have tipped me off but hindsight is 20/20. We rode around the long gravel road to the observatory which of course was closed and there was this crazy bucking bull that looked like he wanted to kill us so I said that I was not going in there to even look at the observatory with that thing in the fence with me!

We kept going around that long road and over the scariest bridge of all time until I looked up and saw something dash out in front of us and told Mike to turn his bright lights on so we could see. It happened to be about 5-6 fawn that ran in front of us and Mike asked if I wanted to get out and look for them. I said okay and we got out of the car. South Farm is super dark so we couldn’t see anything so I was about to get back in the car when he said he had a present for me and popped the trunk and there was a tarp back there which kind of freaked me out for a minute until he moved it over and uncovered a huge picture mosaic of the two of us(above). I asked him what it was and he said it was a picture of us that was made of 3000 different photographs that had been taken in the last 3.5 years we had been together. I was amazed I thought it was the sweetest present that I have ever been given for all of about 15 seconds. I was bent over in the trunk examining all of the photos when he said “there are a lot of great memories in that picture huh” and I replied yes and when I turned around he was on one knee and said “do you want to make some more memories?” I remember very little detail of the next few minutes but I remember crying hysterically and asking if this was real haha. I fell to both knees on that gravel road(it hurt) but it was worth it. Mike said I had my hands over my mouth until I gave up the left one for the ring of course!! Next I jumped up and down for a while and then I said we needed to call our families which we did!! The Arnold’s were ecstatic even if they did already know it was coming sometime soon. I couldn’t ask for a better reception of the news from my family and friends. I will remember that day for the rest of my life. We actually took no photographs which is uncommon for me but it is that much sweeter that I have such a vivid memory of the event and I lived it fully without stopping to worry about a picture. I wish I could go back to that day so badly! I think the only thing that will top it will be the wedding!!