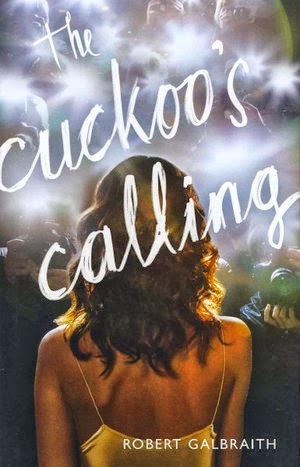 I have yet to post about the brand new book club I have had the pleasure of starting! A group of girls along with myself have been discussing a book club for the last couple of years and it was high time we did something about it. However, most of the girls that were hoping to be apart of it have now moved across the country and that only leaves four of us as members for now! We call ourselves the Fish Tales Book Club as all of ‘our men’ were in the Wildlife and Fisheries department at Mississippi State and because of them we all met each other! So far everyone seems to be enjoying it! The club started in July of this year and we have been meeting once a month to discuss a book that one member chooses for the group to read. October is my month to pick the book and I chose The Cuckoo’s Calling by Robert Galbraith(aka J.K Rowling). If you know me AT ALL then you already know that I am a HUGE Rowling fan. I literally cried at the end of the seventh Harry Potter book and I still feel a little sadness when I think about the series being over. So when I read the great reviews of this book(after it had been released that she was in fact the author in disguise) it was a no brainer that this book would be my choice for October.

The book is a monster…however I did not purchase the actual print copy which I now wish I had. I actually decided to listen to it(audio book) since we were going to be doing a lot of driving to Disney and also to South Carolina. The book clocks in at almost 16 hours of listening time!! However, I really enjoyed listening to all of the accents the reader made. Of course the book is British and it was read by a Brit so the accents were cute and some of the words were hilariously pronounced. With this being my first audio book there were things I enjoyed about listening to a novel and things I did not. I did not like the fact that I could not just turn the page back and reference something easily. Also, if you get distracted(which I am quite a bit) you will miss huge pieces of information. I liked that I did not have to stare at a page and have my eyes hurt after hours of reading.

Now on to the juicy stuff…no I am not divulging any spoilers! I will say that I enjoyed this book immensely. It was a total Rowling style book with tons of detail and wonderful explanations that I love so much. I will say that it was not as suspenseful as Harry Potter(I don’t think she was going for that) and the story line is more in depth than you may think after reading the synopsis. The characters are very well thought out and detailed. I really enjoyed the character Detective Cormoron Strike(is it just me but I have never heard of anyone with the name Cormoran) and although his life seems daunting to say the least, you cannot help but to cheer for him and hope everything works out for the best. The ending is tidy, something I really appreciate. There is nothing worse than reading an entire book and being unhappy with the ending. Anyway, if you’re looking for a book to read alone or with a group I would recommend this one!